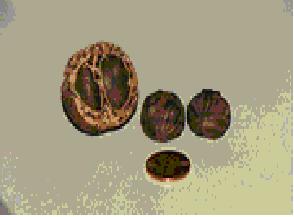 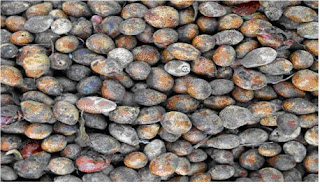 OVERALL OBJECTIVE
To review the characteristics, growth requirements, distribution and importance of mungongo tree (Schinziophyton rautanenii)
SPECIFIC OBJECTIVES
INTRODUCTION
The mungongo tree (Schinziophyton rautanenii) occurs naturally in Southern Africa and is a staple food in the Kalahari among the hunter gatherers (Graz 2007).Archaeological evidence has shown that they have been consumed amongst San communities for over 7000 years and their popularity stems in part from their flavour and in part from the fact that they store well and remain edible for much of the year (Wikipedia 2009).In its core distribution areas where its abundant, nutritional value and reliability equals many cultivated staple crops. Outside its core area it is eaten but not as a staple (Agro forestry tree database 2009).The mungongo tree is most important in that the nuts have edible oil which is extracted and is locally used in food preparation and personal care products and can also be used in manufacturing industries for production of various products (Julian et al 2009).
LITERATURE REVIEW
SCIENTIFIC CLASSIFICATION
Kingdom  : Plantae
Division   :Magnoliophyta
Class        : Magnoliopsida
Order       :Malpighiales
Subfamily: Crotonoideae
Tribe       : Ricinodendreae
Genus      :Schinziophyton
Species    : Rautanenii Authority: (schinz) Radcl- sm
Synonyms: Ricinodendron rautanenii Schinz (Wikepedia 2009).
COMMON NAMES
English- mankett tree, wild akkernut, featherweight tree.
Tswana- mongongo
Bemba – mukusu (Agroforestry tree database 2009).
! Kung Bushmen - //Xa, mongongo
Lozi – mungongo
Herero – mangetti, mongongo
Kwangwali – ugongo, ngongo
Shona – mungomangoma
Afrikaans – wilde okkerneut (Natural hub 2009).
ORIGIN AND GEOGERAPHICAL DISTRIBUTION
Distribution of S.rautanenii in Africa 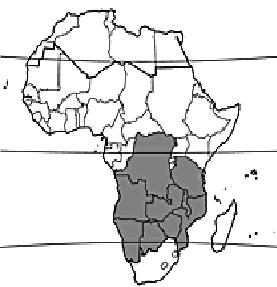 The tree is distributed widely throughout Southern Africa. There are several distinct belts of distribution, the largest of which stretches from northern Namibia into northern Botswana, South- western Zambia and Western Zimbabwe. Another belt is found in Eastern Malawi and another in Eastern Mozambique (Wikipedia2009). It is sometimes planted in southern DR Congo and Zambia. It has been planted on a trial basis in Israel, but productivity there seems to be very low (Graz 2007).
ECOLOGY
Schinziophyton rautanenii occurs as scattered trees or small localized stands. It grows on wooded hills, in bush veld, on sandy ridge tops, sometimes on alluvial margins of major rivers and limestone outcrops (Ronne and Joker 2006). In the area where it occurs the mean annual temperatures are about 20°C, and the maximum daily temperatures often exceed 30°C; the plant tolerates light frost, but temperatures below 7°C kill seedlings (Graz 2007).The tree is found between 5˚S and 23˚S and occurs at 200–1500 m altitude and grows well when the annual rainfall is 200–1000 mm (Ronne and Joker 2006). This shows that the tree does well in hot dry climates with poor rainfall (Beau 2003).It is always found on deep sands with a 94–99% fine sand component (Graz 2007) and it is most frequent and occasionally dominant in Kalahari sand woodlands but is also found in munga woodland, scrub mopane and lake basin chipya.In core distribution areas it occurs in large grooves of open woodland  as a dominant or co-dominant tree species with other species like A.quanzensis and B.africana.The largest grooves can be 450 hactres and occur on sand crests, smaller ones are found where sand banks are against bedrock. It is also common on hummocks along alluvial margins of important water courses for example the Zambezi marshy. The tree does well on well drained deep sandy, sandy alluvium or rocky soils. It is rare on calcareous soils and does not do well on waterlogged, poorly drained or on soils subject to flooding (Agro forestry tree database).Its habitat is also subject to frequent fires (Graz 2007).
DESCRIPTION
The Schinziophyton Rautanenii tree is a dioecious shrub or small to medium-sized
tree up to 20 m tall (Graz 2207) and has a large straight trunk 1 metre in diameter
with stubby and contorted branches and a large spreading crown (Beau 2003).The
bark is up to 5 cm thick and is pale grey to light golden-brown , smooth first later
becoming reticulate and flaky. Young branchlets, leaf buds and stalks have reddish brown furry hairs and both the branches and stems exude a white gum (Ronne and Joker 2006). The tap root goes down until it reaches water but the lateral root is very small (Beau 2003).
The Schinziophyton Rautanenii  tree (Ronne and Joker 2006) 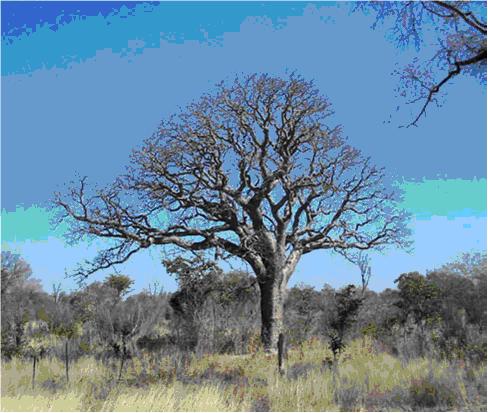 The leaves are alternate, digitally compound, consisting of 5-7 leathery segments usually hairless below and with grey woolly hairs above. the leaves are also dark green on the upper side and creamy white on the underside (Agro forestry tree database 2009).The leaflet is also a wide lance to an egg shape. The leaflets are carried on hairy stalks that are up to 15cm in length and the leaves are also about 15cm long and there are usually 1 or 2 black glands on the upper side of each leaf-stalk (Beau 2003). 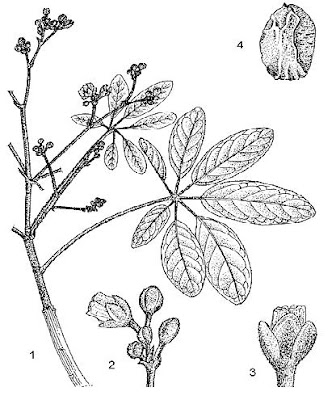 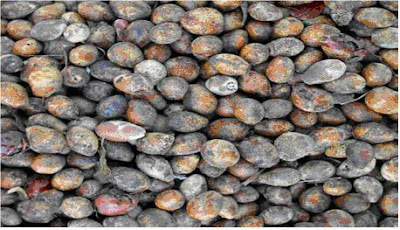 Fruit is ovoid up to 3-5 cm × 2-3.5cm in diameter when dry and up to 7 × 5cm when fresh and consists of 5 layers; a light green fruit skin, a layer of fruit flesh, a thick and hard nut shell, a thinner woody inner shell and an edible nut (Leger 2003) weighing 7-10g with leathery skin and fleshy, dry, spongy pulp 2-5mm thick, shell tough 3-7mm thick. The stone contains 1 and occasionally 2 kernels. (Agro forestry tree database 2009).
The mongongo nut (Wikipedia 2009)